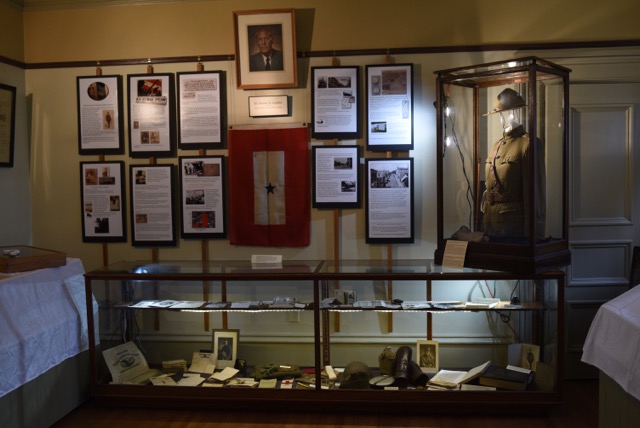 In 2006, Harriet Ivey opened a trunk in the attic of her parent’s home and found treasure. It wasn’t buried and it did not include gold bars but it was the kind of treasure that every local historical society wishes to find: artifacts that tell a meaningful story of global significance with a local perspective.

The contents of the trunk included the uniform and personal items from her grandfather, Dr. Homer D. Ludden, who served in France with the medical corp during the First World War. Dr. Ludden was a physician in Mineral Point before and after the war, totaling nearly 50 years of service. He was one of the city’s most beloved citizens and when he retired, there was a parade in his honor, including 50 years worth of Ludden “babies” riding on floats down High Street on hay bales. In the early 1960s, Ludden Lake was named after him. (not his grand-nephew Allen Ludden, as commonly believed)

At the bottom of the trunk in the attic were stacks of letters that Ludden wrote home to his wife in Mineral Point. While the uniform and the personal effects are interesting, these letters paint a picture of the war that reveal the sacrifices that veterans make to the country. After the war, prior to his discharge, Ludden continues to write, letting his wife know of the actual conditions during the war, things that he was unable or unwilling to share with her during the fighting. The last letters carry an ominous warning back to Mineral Point from France of a menace that was even more deadly than the fighting itself – the Spanish Flu epidemic.

An exhibit telling Dr. Ludden’s story opened at Orchard Lawn in 2018 for the 100th anniversary of the United States’ entry into the war and will be open for the entire 2019 tour season at Orchard Lawn.